skip to main | skip to sidebar

The Adaptors - Trust in Technology 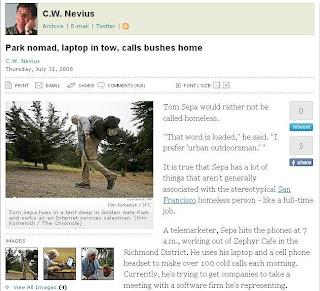 Tom Sepa would rather not be called homeless.

"That word is loaded," he said. "I prefer 'urban outdoorsman.' "

It is true that Sepa has a lot of things that aren't generally associated with the stereotypical homeless person - like a full-time job.

on being the first
to read my new...

my objective is simple: Criminal Activities
my motive is a little bit more complex: Revenge

To begin my plan, i will first Expose a Famous Actor/Actress as a psycho-sexual criminal stalker. This will cause the world to sit up and take notice, stunned by my arrival.

Who is this Demented Madman? Where did he come from? And why does he look so good as an Intelligence Transferred into a Computer?

Next, i will Seize control of the Empire State Building. This will cause countless hordes of Computer Programmers to flock to me, begging to do my every bidding. My name will become synonymous with Fuzzy Bunnies, as lesser men whisper my name in terror.

Finally, i will Reveal to the World my Needlessly Big Weather Machine, bringing about an End to Sanity.

This will all be done from a Underground Secret Headquarters of Doom, an excellent choice i might say. These three deeds will herald the end, and the citizens of this planet will have no choice but to elect me their new god.


Skylar has a policy about Celebrities Stalking Us (CSU's) -- I try to ignore it. "Try" is the key word here... whether or not we should believe that famous celebrites stalk us...

I don't know. It just seems so much like paranoia.

Now if it's reality-based, meaning, it's for real that it's happening to you, I would also ignore that as well. Frankly, I would like to have a celebrity stalker to say hello to Skylar, (preferably a hot female), and give me money for bills and rent and a living.

Unfortunately, I need money bad right now. If you're going to stalk someone, at least give them money for the hassle. And perhaps a date or two as well. Is Skylar asking for too much? I mean, I'm not with COPSTAT or anything.

Of course, you celebs out there...at least gimme some money. I have suffered for this long, you know. Now gimme money! I'm not kidding! Enough with the madness. Money! Now! Then I'll think about singing songs or telling jokes or whatever.

"banned101"... John CoLtrane, Pink Floyd, GURU, banned1, Jethro Tull, Us3, Miles Davis, Alan Watts, COMEDY SKITS, NEWS, COMMENTARY... WE GOT IT ALL! Bringin' back a little taste of freeForm Radio from the late sixties, a time when you never really knew what you'd hear next!